WE DENY Mr. Gustavo Moscoso Zenteno's public declaration about the liberation of our 9 compañeros from "Rio Jordán". 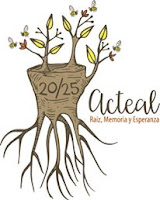 Tree days after our 9 brothers were released in the community of “Río Jordán” from the settlement of Miguel Utrilla Los Chorros from the municipality of Chenalhó, Chiapas, we want to DENY the truth in the words of the public declaration made by Gustavo Moscoso Zenteno the coordinator of Regional Subsecretary of the Government Secretary, published in the bad government website on the 10 of January: http://www.chiapas.gov.mx/noticias/liberan-a-integrantes-de-las-abejas-retenidos-la-comunidad-los-chorros-de-chenalho
In that statement it says that our brothers had been “held in custody because they wouldn’t pay their community charges” and that “after a negotiation with the traditional authorities they were released and that their water and electricity services were restored”.
On that matter we want to condemn and explain that:
a) Our brothers, who are in the resistance, were actually detained because they refused to accept a construction project promoted by the bad government as a “development project”. The truly aim of this project is to divide the people who is in the resistance.
b) The statement of the bad government says that our nine brothers were “held in custody” but we are actually talking about imprisonment in a 2’5x4 metres jail for 96 hours. This is nothing but a kidnapping action. If it wasn’t for our acts, helped by the international solidarity movement, our brothers will still be in prison for a non-defined time. They were there under very poor conditions, with a very low temperature, and with the real threat of being beaten. They were also threatened with the expulsion, the death and the burning of the houses of Antonio Ramirez Perez and José Vasquez Entzin if they didn’t pay the fee of 5 thousand pesos each.
In several occasions we have denounce the existence of Paramilitary forces inside the “Comité de participación ciudadana” such as Victor López López who is one of the perpetuators of the Acteal massacre. He was freed thanks to the corrupt ministers of the “Suprema Corte de Justicia de la Nación” and he has said that he feels free to kill again If he wants to because the Government of México rewards with money, houses and cars whoever kills the people in the resistance.
Three of the detained brothers are health promoters who help with medical care to the “Organización Sociedad civil las Abejas de Acteal”, one is a catechist, two are survivors of the Acteal massacre and two come from the “Rio Jordán” community.
Rosa Pérez Pérez followers and the municipal agent had perpetuated a KIDNAP and violated the right to health which is the 4th article in the Mexican Constitution.
c) In contradiction of what the statement of the corrupt government says, the water and electricity services were NEVER restored. Furthermore, the people who is against their political resistance, inside their own community is pressuring and threatening our 9 brothers, claiming that they still must pay the fee.
With all the previously exposed we DECLARE that:
·      From the morning of the 9 of January we have send a letter to the municipal agent of “Río Jordán” aiming to resolve the conflict and to prevent more violence against our 9 brothers. We have no response to our letter.
·      Our Organization “Organización Sociedad Civil de Las Abejas”, still ACCUSES the bad municipal, state and federal government that our brothers and sisters of “Las Abejas” from “Rio Jordan”, are still being punished with no electricity and water supplies since 2015.
·      We reinsure that our actions have been for more than 25 years and always will be of a pacifist kind. The killer bad government has always tried to condemn our struggle and treats us as liars. We want to make understand to our brothers and sisters of the “Río Jordán” community that we should all be respectful with each other’s because our fight is not with them or their political views, our fight is with the corrupt and bad government who they sadly still believe in.
·      Lastly, we ask to civil society (national and international) that helps us to spread our words and struggle because our words are the truth and this needs to be used against the lies of this bad government messenger Gustavo Moscoso Zenteno, coordinator of Regional Subsecretary of the Government Secretary.

From Acteal, place of conciousness and House of thee memory and the hope.